At a meeting in Auckland, they and five other councils across Northland, Auckland and Bay of Plenty have re-signed to the Upper North Island Strategic Alliance (UNISA) for the next two years. They also released The Upper North Island Story, a report showing how life could change for the more than 2.5 million New Zealanders living in those regions, which account for more than half of national population and gross domestic product.

The Upper North Island Story outlines population and economic growth projections to 2033. It identifies key challenges and opportunities that Upper North Island communities will face as a result of projected changes. The report will help align local and central government priorities. UNISA partners will now be working together to tackle shared challenges and maximise opportunities through collaborative investment, planning and advocacy work.

“This close collaboration with our partners in the Upper North Island fits neatly with the work we’ve been doing at a regional level in the Waikato to lay the groundwork for a more prosperous future,” said Waikato Regional Council chair Alan Livingston.

“Hamilton is a dynamic city that’s been growing faster than we anticipated which has come with its set of challenges. By working with our neighbours in the Upper North Island, we can collectively have a positive impact on our growth, economy, lifestyle and communities,” said Mayor King.

Growth in the four northernmost regions is increasing quicker than the rest of the country and is expected to continue doing so. The Upper North Island Story report identifies the need for collaborative investment and planning to tackle increasing pressure on housing, infrastructure, natural resources such as water and productive land, skilled labour and transport systems. The report can be viewed online www.boprc.govt.nz/unisa (external link) .

“The scale of our collective Upper North Island issues means we need to manage them well for our regions but also for the benefit of the country,” said Mr Livingston.

The Waikato also has a close focus locally on managing such issues. The draft Waikato Plan, recently released for consultation, includes key actions such as collaboration on a regional development strategy, identifying regional priorities for community infrastructure, integration of the Waikato and Auckland transport networks and ongoing implementation of the Waikato Means Business economic development strategy.

“It is essential that our work on these fronts locally is integrated with what’s going on inter-regionally in the Upper North Island,” said Mr Livingston.

“We’re all facing similar challenges and this is an opportunity to harness the great ideas and talent across the regions, and find ways to enhance the Upper North Island as a collective,” said Mayor King.

The councils involved in UNISA are: Auckland Council; the Bay of Plenty, Northland and Waikato regional councils; Hamilton and Tauranga city councils; and Whangarei District Council. UNISA was set up in 2011.

Our picture shows the UNISA mayors and chairs, with Alan Livingston on far left and Andrew King to the far right. 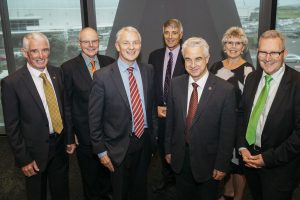